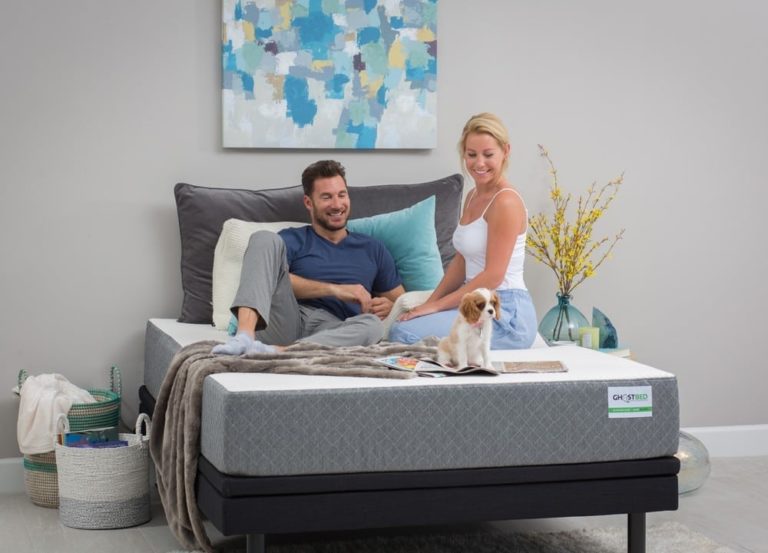 Our Lowdown Of The Ghostbed Mattress: 2022 Update

Further expanding our lineup of hybrid mattresses comes our latest Ghostbed mattress review. You may have heard of this product by now, or seen adverts on the TV or billboards because Nature’s Sleep (the company behind the Ghostbed) has been around longer than most of the recent startups. In fact, the idea behind the Ghostbed mattress was brewing for many years, as far back as 2001, and then was finally released in 2015. Interestingly, the product was initially named Ghost mattress because its founder Marc Werner had great fear for ghosts he believed were under the bed when he was a child.

Following the success of the GhostBed mattress, next came the GhostPillow in 2016, and soon after, in 2017, we were introduced to the GhostBed Adjustable Power Base.

What's Inside The GhostBed?

The GhostBed mattress has chosen to combine three different foams, which create a perfect balance of comfort, support, and durability. The three foams, which total to combine an 11-inch thick mattress, are layered as follows:

All of these core layers are wrapped in a stretchy cover, made of a durable blend of viscose and polyester. The cover is zipped. This means that it can be removed easily for cleaning. The fact that you can easily remove and clean will increase the cleanliness and overall hygiene of the mattress cover and user.

While 11-inches isn’t the thickest by today’s standards from a mid-range mattress, it’s still 1″ thicker than the comparable Leesa and Tuft and Needle mattresses.

On a scale of 1-10, 1 being the softest and 10 being the most firm, the GhostBed comes in at a medium-firm 6.5 on the mattress firmness scale. This is popular among most sleeping styles. It’s soft enough to relieve pressure points for stomach sleepers effectively and firm enough to support your spine for back and side sleepers healthily. The lower layer high-density memory foam core supplies all the support you need, while the top layer of synthetic latex provides softness and bounce.

Although we touched upon this briefly earlier, let’s take a more in-depth look at how the Ghost mattress fares with different sleep styles:

A good mattress should be able to isolate motion effectively, meaning, when one person moves around on the bed, a partner sharing the bed on the other side should feel no movement. The Ghostbed mattress incorporates a 2-inch memory foam layer that is infused with gel, which helps in minimizing motion transfer in a big way. When two people are sharing the same bed, this special feature about the mattress guarantees both a long and quality sleep due to minimal disturbance. In fact, the feeling a sleeper gets is as if they are the only person in the bed.

When it comes to edge support, nothing beats a good old fashioned spring mattress with a metal-lined perimeter. But, there are downsides to those mattresses, which is why we have moved on in this industry.

As for the GhostBed, edge support is much better than you may first expect. Latex is a very durable material and springy in nature. It pushes back when pressure is placed on it, as opposed to memory foam, which simply gives. Having the latex top layer is an excellent choice for providing edge support as it seems to work much better than if it were the gel layer on top instead.

Quality sleep can only be achieved when the right body temperature can be maintained throughout one’s sleep. The GhostBed mattress has incorporated features that enable it to effectively moderate body temperature. This is done by using the cooling gel memory foam layer that makes up 2 inches of the mattress density. When the foam comes into contact with high temperatures within the body, the millions of gel beads in the foam acts to reduce heat by actively decreasing the body temperature. This guarantees the sleeper the best quality of sleep.

However, in-between the gel layer and the sleeper is the 1.5 inch of latex. Latex isn’t the best when it comes to possessing cooling properties. However, it is thin enough to allow the gel foam layer underneath to be still effective. This is the dilemma in choosing between comfort and cooling. GhostBed has opted for comfort in this case, which is fine.

Is The GhostBed Good For Heavy People?

Not all mattresses cope well with heavy weight and often sag or deteriorate much quicker when faced with overweight people. The GhostBed can support in total up to 750 lbs. This is a tremendous amount of weight. So couples who weigh over 300 lbs each will be reassured to know that the GhostBed will be a good purchase.

We must add, regardless of whether you’re in the heavy weight range, this is still actually an excellent choice for lightweight and petite people.

The length of the warranty is essential for any product and equally enough for an expensive purchase, such as a mattress. The GhostBed is offered with a 20-year cover from the date of purchase. This means that any issues arising from defects on the manufacturer’s side would be covered under warranty. This assures its users of the quality of the product. The fact that the manufacturer provides 20 years warranty cover means that the mattress is highly durable.

A lengthy sleep trial is good for unsure users, or for those couples who have differing opinions in comfort. GhostBed is offering 100 nights of risk-free usage for you to be entirely sure that it’s the right mattress for you. However, you must try it for at least 30 days, just to be sure. After this, if you’re unhappy with your new mattress, simply contact the company and arrange a return within the 100 day period.

A 100-night trial is not the longest in the industry, more of a minimal term. Although many other mattress companies offer 100 nights of trial, many others offer 120, and some even 365 nights of usage (Nectar mattress).

The quality of the mattress has been tested by accredited authorities, including Certi-PUR-US, and given a passing score. This means that the quality of memory foam used in the mattress is safe for your health and the environment. This is because it has low emissions of volatile organic compounds (VOC’s). Essentially, this means that the air quality in the bedroom will be good for any person’s health, and anyone in close contact with the sleep surface will remain unharmed.

Made In The USA

Many users are aware that only the best and high-quality products come from the US. It is a statement that the product has been made by experts in the industry and has been tested before being given to the market. Made in the USA, the GhostBed’s manufacturers have more than 15 years of research and manufacturing mattresses to meet market demand for sleepers. The experts, through their innovation of latex and gel memory foam, have been able to come up with this mattress that offers quality sleep.

Sadly Nature’s Sleep doesn’t offer a white glove delivery service with this mattress. However, shipping the mattress compressed and rolled in a box makes things easier for the average consumer, meaning that set up in your bedroom should be easy with the help of another set of hands.

Most sizes in the US are fairly standard but may be slightly different for each company. Below are the available sizes and their dimensions:

What Are The Other GhostBed Mattresses?

There are currently four mattresses offered by Nature’s Sleep in the GhostBed range. Here is a brief introduction to each:

The product in this review, as mentioned above, the original is made of latex and memory foam.

The Flex is also 13 inches thick and constructed of primarily gel foam and individually wrapped pocket coils. The hybrid mattress places much attention on luxury and body contouring.

The 13-inch Luxe is a memory foam and proprietary foam-based combination. No latex or springs here. It is mainly focussed on cooling.

This is the newest and most expensive in their range. At 12 inches thick, it consists of 7 layers of gel foam, numerous proprietary trademarked foams, and spring pocket coils similar to those found in the Flex.

The GhostBed mattress has some high-end characteristics that enable its customers to have good sleep while paying mid-level prices. This includes the cooling gel foam that reduces motion transfer and moderates temperature levels, and the aerated latex, which ensures mattress longevity and offers good pressure point relief. Apart from the features incorporated in its design and manufacture, it also comes with a 20-year warranty and a 100-night trial. Some users may have minor issues with the mattress, but the majority of sleepers have claimed that it is a good product and should be acquired by those who want a good balance of price, build quality, and comfort.

The team behind Better Slumber are experienced researchers and writers that have been working in the mattress and bedding industry for many years. Each person has their own expert skills and knowledge to help offer advice, whether it's about improving sleep, or choosing the perfect mattress.