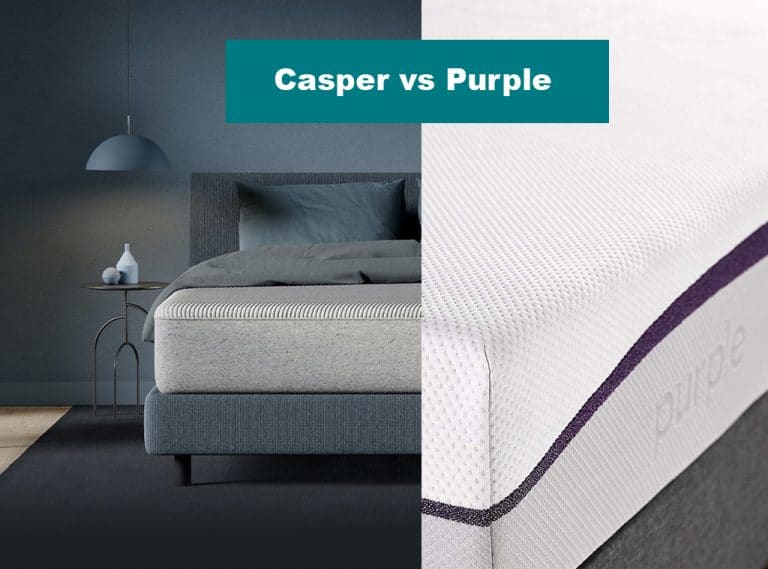 If two mattresses have a similar price point and both have a track record of incredible performance, it can be incredibly difficult to determine the best one.

A typical example is when trying to compare Casper vs Purple. Both Casper and Purple are industry leaders when it comes to developing a comfortable and supportive mattress. Each brand injects something innovative and catchy. For Purple, is its proprietary, unique, and patented materials within the comfort layer ensure that sleepers get what they actually need. Its most vital point is the Hyper-Elastic Polymer™ grid, never seen anywhere else.

Similarly, the Casper Original oozes high-quality and proprietary material, resulting in a well-balanced mattress. One of the strongest points that Casper offers is its zoned support system and AirScape™ foam.

So, choosing between these two top brands can be tricky since both mattresses offer a lot to their users. But, the question is, which of the two models most sounds like a worthy investment? Although Purple and Casper are reliable and popular mattresses, they have some differences, which makes them ideal for different kinds of sleepers. Let’s take a closer look at each in this comparison article.

Who Would Prefer The Casper Mattress?

Who Would Prefer The Purple Mattress?

This section looks at the critical similarities that these top mattresses share. Such features include:

Looking deep into the Casper vs Purple mattress analysis, you’ll realize there are glaring differences. Such differences include:

Cover: The cover is a knit polyester blend, making it soft and cozy.

Comfort: This layer is a proprietary Airscape™ foam. This feels like that of latex, i.e., natural cooling properties, bounciness, and gentleness. Additionally, it has some perforations that make it breathable and allowing people to remain cool while sleeping. Such a combination of features makes it firmer, making sleepers sleep on top rather than ‘in’ the mattress.

Contour layer: This layer is designed entirely of memory foam that contours to your body’s shape, thus offering excellent pressure relief. This memory foam is zoned to provide balanced support – firmer at hips and softer at shoulder and legs. Sleepers get outstanding support from this arrangement.

Base: This layer is designed from high-density polyfoam, and it’s responsible for the bed’s stability and shape. 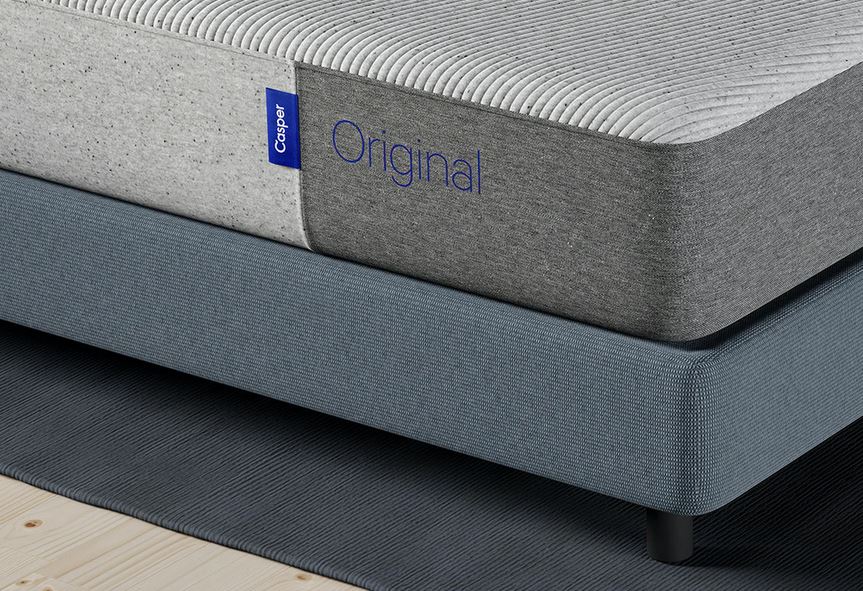 Cover: The cover is made from a stretchy yet gentle soft knit fabric.

Comfort: This part is a proprietary 2.5-inch Purple Grid, which is designed from buoyant hyper-elastic polymer. The layer comes in a grid-like pattern, and it’s incredibly breathable and responsive to pressure. The grid walls will collapse as you sleep on the bed. This results in consistent contouring and pressure relief.

Transition: This is a layer of 3.5-inch polyfoam, and has a firmer response to pressure than the layer above. Thus, it stabilizes the entire structure and eases sleepers into the sturdy lower base.

Base: This section is designed from 4-inch high-density polyfoam also, thus allowing for a durable and long-lasting foundation. 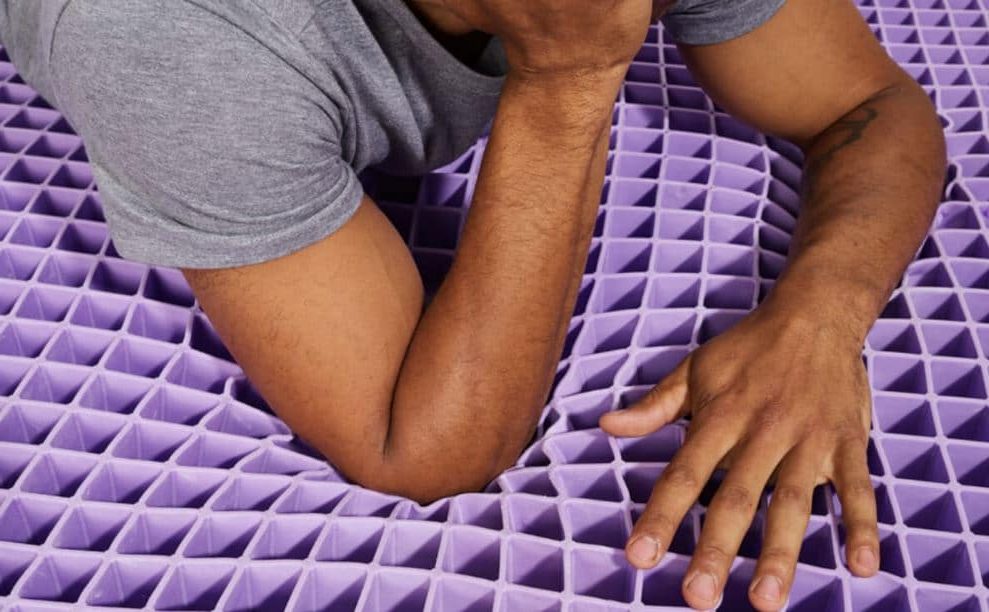 Comparing The Firmness and Feel

In our opinion, the Casper has a firmness rating of 6.5/10, while Purple receives a slightly firmer rating of around 7/10.

When comparing the Purple mattress vs Casper, the feel might vary with the weight, size, and sleeping position of a person. However, Casper gives a perfect balance of support and pressure relief with a touch of lovely bounce on the top layer. People with back pain might find Casper to be ideal, thanks to the neutral alignment it offers. You can sink into it without noticing, which makes it a better deal for sleepers of different needs, such as combo sleepers.

Purple is firmer but also extremely contouring, courtesy of the buoyant hyper-elastic polymer. The comfort grid is what makes it a standout. Those who need an orthopedic level of support and firmness might do well with the Purple mattress. Though it gears towards the firm end of the scale, it isn’t uncomfortably hard. The feel is similar to memory foam, but not the same.

The Purple and Casper both feature cooling features. Casper has perforated Airscape technology, while Purple has an open grid-type comfort layer, both promoting airflow. However, in our opinion, Purple is slightly more breathable and a better cool-sleeping option. That isn’t to say Casper sleeps hot because, for a foam mattress, Casper is very effective at keeping body temperature at a neutral level.

Though Purple doesn’t have a memory foam top layer, it excellently handles motion transfer, but not as effectively as Casper. With the Casper mattress, even someone moving around within very close proximity will go unnoticed. As for Purple, motion isolation is good across a large bed surface (such as King or Queen size) but is sleeping close to one another; there may be a little motion transfer.

It’s not unknown that foam mattresses can lack decent edge support. When comparing the Purple vs Casper, we’d have to say the former beats the latter. There is very little dip and no feeling of rolling off the bed when nearing the edge with the Purple. Casper, on the other hand, is typical of other all-foam mattresses, and has a slight “give” when sat or sleeping near the edge.

The Casper mattress has more off-gassing that the Purple since it’s an all-foam mattress. However, the smell disappears within 48 hours. Purple isn’t without some slight odor-release, though is much less than the Casper and not resembling the typical foam mattress odor.

Couples who have experienced memory foam mattresses in the past will know that there isn’t much bounce in them. However, these two models on review aren’t your typical foam mattresses. You’ll be pleased to know there is a level of responsiveness, thus mimicking a very subtle spring-like bounceback, thus making it ideal for couples who enjoy being active in bed.

Before any type of discount or promo codes, when we compared a Queen size for each brand, the Purple mattress was found to be more expensive than the Casper. However, they are both considered to be in the same price category (mid-range).

Between the two mattresses, there is no difference in the length of in-home trial period (100 nights) and warranty (10 years).

Comfort and support are crucial to any sleeper. But so is budget, and other factors such as warranty, free shipping, and sleep trial,

The Purple mattress offers something a bit different from the traditional memory foam feel. However, it is just as supportive and utilizes its proprietary grid-system with tremendous effect, creating a comfortable and supportive sleep surface for numerous sleeping styles.

We’d be hard pushed to choose one over the other and would most likely base the choice on price at the time of purchase or on the desired firmness (considering that Purple is firmer than the Casper). In terms of budget, comfort, and post-sales perks, there isn’t much between the two mattresses. Choose the one that suits your specific sleeping needs.