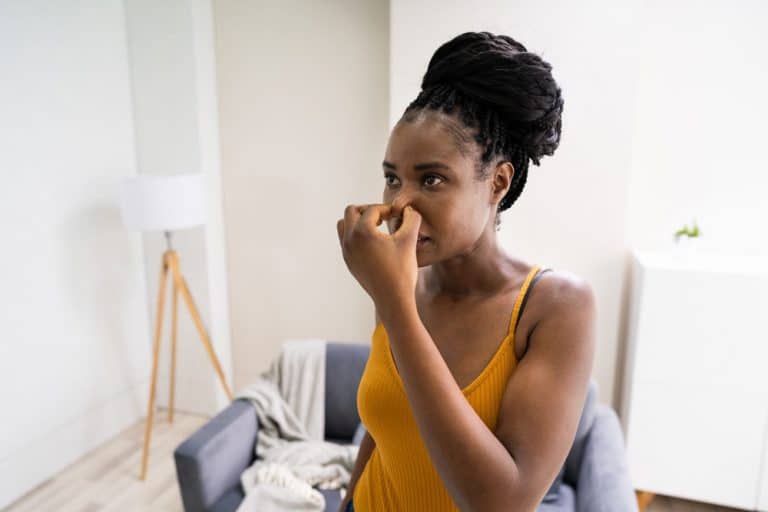 Home / Sleep Health / Why Does My Bedroom Smell In The Morning?

Why Does My Bedroom Smell In The Morning?

It’s a common question that many people experience: “Why does my room smell in the morning?” The answer is, that your nose just can’t see what’s going on.

Your nose is a sensitive instrument designed to detect all of the odors around you and warn you about potential threats, and change accordingly. A room doesn’t give off a specific scent; it blends together all of the smells that come from furniture, clothes, carpets and other materials that may have been left out overnight. When these different scents mix together in proximity to each other, things get more complicated than they would otherwise be, and we associate them with a term commonly referred to as “sleep smell”.

Not only does a room not have one distinct scent, but it also doesn’t always smell the same. You may notice that particular scents are more pungent or powerful depending on the time of day or what season you’re experiencing. You may also notice that your sense of smell is much more sensitive in the mornings than at night.

Since there is no specific or singular smell from a room, your nose may be sensing and reacting to the strongest of these odors at the time. That’s why you may smell something when you get up in the morning, while there was no discernible odor when you went to bed. Your nose can’t differentiate between these individual smells and reacts to the strongest scent at the time.

Common Causes Of a Smelly Room In The Morning 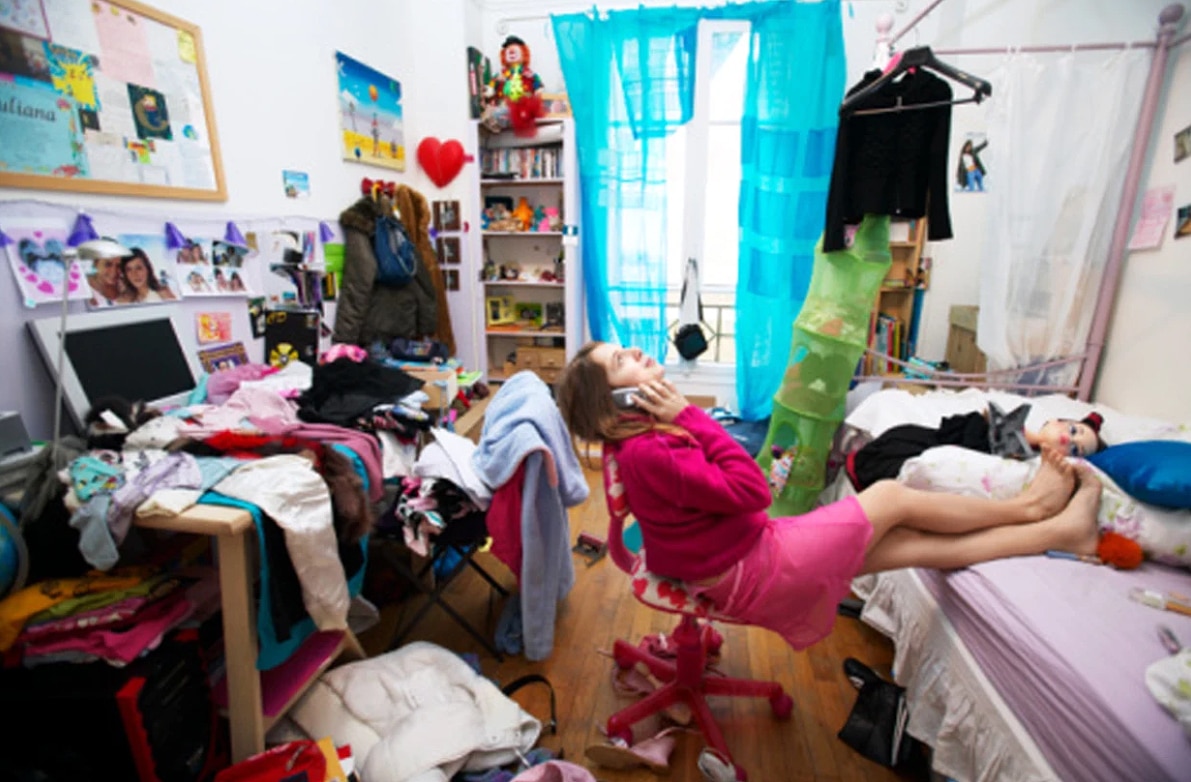 So, although you may not pinpoint any particular odor in your home, there are lingering and worsening smells that have been transferred to your room from the daily activities you perform in it. Below we list 10 of the most common causes of morning smells in a bedroom:

I mentioned that your room may not always smell the same. That’s because there are different odors in a room depending on what’s in the room with you. The same is true when it comes to what your food smells like after being left out overnight.

So, what are these morning smells, then? In addition to whatever else happens to be in your bedroom – like a lingering perfume or body spray – you’re most likely smelling the leftovers from food and drinks. Remember, you had last night’s dinner right there on your kitchen table before deciding to head up to bed after watching some TV. A good amount of the food left overnight will permeate the air in your bedroom, and sometimes during the night, it’s just impossible to avoid the scent of food.

Many foods leave a scent that lingers on various surfaces, even if they’re not directly exposed to them. Common foods like bread, cake and pastries may leave a lingering smell in your kitchen. Still, even things as simple as potatoes or coffee can leave a scent on certain surfaces of objects around them for an extended period, especially if those objects are left out overnight without being cleaned properly beforehand.

Of course, another common scent during the morning – or any time of day – is smoke. If there are smokers in your home or you have been a smoker recently, it can be hard to get rid of the smell smoke leaves behind. The easiest way to do so is through ventilation and airing out everything overnight. But some fabrics and items are more difficult to wash and clean than others. Regardless of how much you try, there will always be a lingering smell in objects that have been around smoke before; there’s just no getting around that fact.

Mold is something that most people would agree smells bad; it’s often something that is disinfected or cleaned up with bleach but remains long after the smell has gone away. Mildew is the microscopic fungus that grows on fabric, causing the odor it gives off. Again, if you want to prevent mold from growing in your pillowcases and blankets, it’s best to clean them at least once a week.

Aside from your bedding, mattresses commonly fall victim to mold. This is often due to spillages, incontinence, damp rooms and various other factors that can cause a musty smell in the bedroom. To reduce the effects, learn all about mattress care and maintenance here.

Do you have a family member who passes gas often? Or maybe someone who is lactose intolerant or has other digestive issues? These can contribute to horrible bedroom morning smells, depending on the cause and severity of whatever is causing the problem. Rapid pants or burping can also contribute.

If you have someone in your home who has difficulty containing themselves, those little accidents can leave behind a potent smell that lingers for hours, even days. The same is true for body odor. Some people may not shower as often or regularly as other members of the house because of an illness or inability to do so on their own; these lingering odors are transferred to the room via clothing, sheets and blankets.

If you have someone in your family who is elderly and suffers from incontinence, they may be experiencing problems with bowel movements or bladder control. Both of these can leave behind an odor that is sometimes difficult to get rid of, no matter what you do. The best way to help is by using air fresheners, Febreze and numerous other solutions to help mask the scent.

Another common culprit of those strange smells when waking up in the morning is your perfume and deodorant. If you remember the last time you wore them, chances are it was the day before. These scents tend to linger for a period of time, and depending on what type of perfume or deodorant you use, if you didn’t shower before bed, they can continue to emit odor without being washed off. When this aging perfume or deodorant odor mixes with sweat and other nightly smells, the perfume becomes nasty instead of nice.

And if you happen to be wearing fragrances that contain musk or vanilla notes, they tend to linger longer than other types of perfume or body spray.

Other types of perfume contain flower essences that smell stronger when exposed to heat – something your room contains in abundance throughout the day and overnight. That’s why these scents may seem stronger in the morning.

If you washed your clothes and didn’t dry them properly, your clothing may still be damp. This leaves a horrible smell that will not go away easily and can radiate through your home. The same occurs if you work out and don’t wash your clothes right away, leaving them dirty with sweat that isn’t easily washed from the fabric.

This nasty smell can permeate through the air around it and into your sheets. And if you’re using a blanket or comforter that contains a removable cover – something like a duvet – this odor can seep through it as well and stick to your duvet.

You’re also most likely noticing a lingering bedroom smell after sleeping from your shampoo or body wash. A shower at night often leaves behind some residue, especially if you’ve used something like a scented soap. Even if you use plain old soap, there will be some oils left on your skin and then transferred to your bedding when you get up.

Although these scents are usually aromatic, if you combine them with other foul odors in your room, by the time you wake up the smell in the morning can be pretty bad.

Along with fragrances and body oils, sweat also has the capacity to leave a smell in the morning. It’s one reason why some people choose to shower in the morning instead of at night – just in case they’re covered in sweat from their sleep.

Menopausal women suffer from excessive night sweats and of course, it’s not just the sweat from sleep that can leave a smell when you wake up. If the bedding itself is dirty and encounters accidental womanly leaks, it can have an effect on your morning aroma as well. Your sheets are going to take on a scent throughout the night and add to bedroom smells when waking up in the morning.

Sometimes these smells can cause dizziness or nausea for infants and toddlers. That’s why it’s so important to clean things as soon as possible and make sure all of the things you need are fresh and clean instead of just letting things go by hoping they’ll air out by the next day – or even worse, a few days later.

How To Remove Morning Smells From a Bedroom 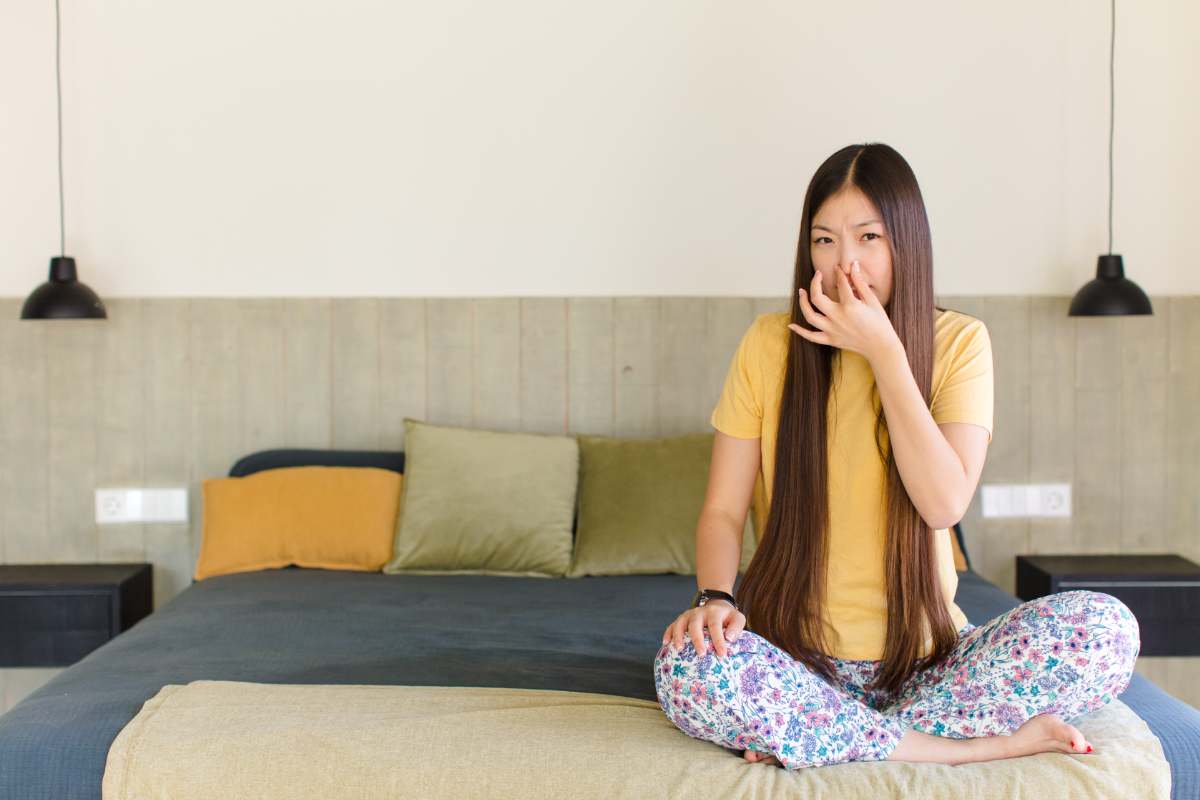 Now that you know why your room smells in the morning, you can start doing something about it. However, the solution is going to depend on what exactly is causing the odor in the first place.

I suggest trying out multiple solutions until you feel like something has worked. Most of these are going to work for various sources of smell at once, so even if it turns out that there are multiple things causing issues, chances are you’ll get rid of bedroom odor without too much trouble. One thing I like to remind people of is that it often takes some trial and error to get rid of certain bad bedroom smells, even if you’re fairly certain that they’re coming from one particular culprit.

Now, let’s take a look at each method of removing unwanted bedroom smells.

So, the next time you notice that your room smells a little funny in the morning – or at any time of day – remember that it’s probably just a product of what has been going on for a while, or even as recently as the night before.

Because of this, it’s often helpful to run a combination of the above so that all of these scents have a chance to dissipate and not linger in one place. Once you’ve gone through these processes enough times, you’ll start to notice that the foul smells are beginning to go away in your rooms.